One of these stars is not like the others (hint: it’s a comet)…

Sooo on Friday The Seattle Times had an article about the comet NEOWISE and how we could actually see it from our often-times cloudy city of Seattle — as long as we were willing to be awake just before sunrise, which right now is around 3 a.m. Now you know me and my love of taking pictures of fun objects in the sky (the moon, solar eclipses, etc.), so I said CHALLENGE ACCEPTED.

We got up at 2:45 a.m., thoroughly confusing the cat, and headed out in search of the comet. All we knew was that it should be near Venus and in the northeast. We had found a pretty good spot for photographing the moon a few months ago, so we decided to try that. Sure enough we saw Venus poking its head up over the mountains to the east. Then it was time to find the comet. It was relatively easy to see without binoculars — we just looked for a star that looked a little bit fuzzy. Maybe it helped that there was a tree next to us with a branch that was pointed straight at the comet. Here! Here! It’s right here!

We stayed with NEOWISE for about a half an hour, mostly with me furiously clicking away on my camera, trying to get the perfect shot. It was pretty dim, so I had to focus manually. But because it was pretty dim, it was also hard to focus manually. In addition, I wanted to do a long exposure to capture NEOWISE and its brilliant tail, but the longer I left the shutter open, the more everything shifted. So it was a lot of trial and error, but I think I got a pretty good shot or two!

Anyway, at some point the sun had come up enough to make NEOWISE even harder to see, and we were feeling sleepy. So we said good night (good morning?) to the comet and headed back home to bed.

It sounds like NEOWISE should be shifting to the early evening hours a little later this month, so keep an eye out for it! It’s pretty neat! I’ll certainly be looking for it. I have so many more photo ideas that I want to try now that I’m more awake. :) 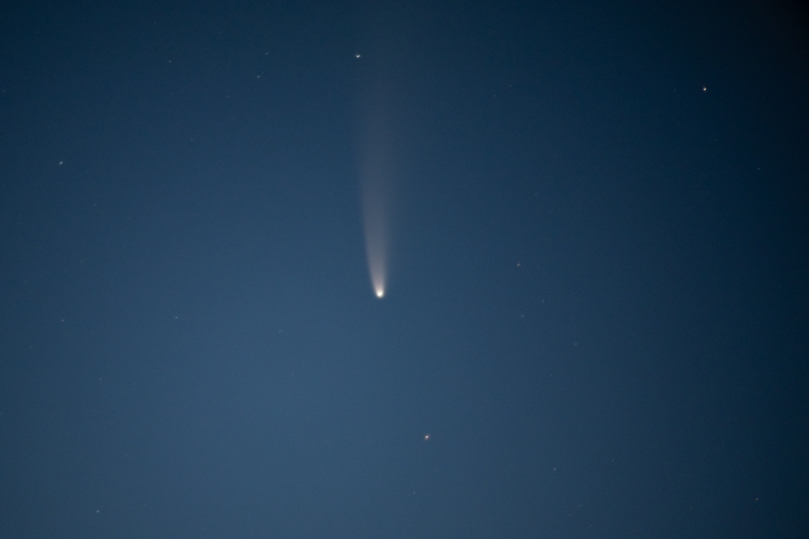