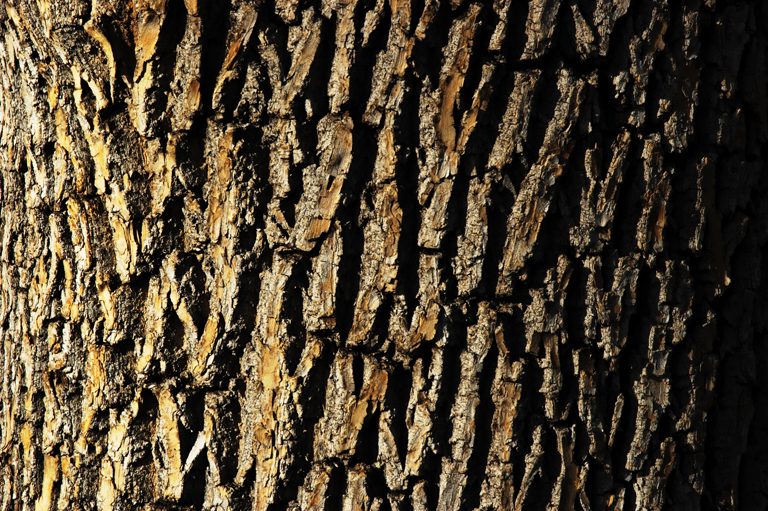 In addition to hanging out with my mom and playing with my sharks last weekend, I also decided to play with a new form of photography (at least to me). HDR (high dynamic range) photography allows you to get both the bright stuff and the dark stuff in the frame to show up. You know, normally on a bright day to get your subject in focus, you have to overexpose the sky. Or to get the sky in focus, you have to underexpose anything else in the picture. So HDR is a technique where you take the same picture multiple times, changing the exposure time for each picture (I just walked down from 1/800 to 1/100 so I had 5 or so pictures at a variety of exposures). Then you use a fancy program like Photoshop to combine them all together into one image. Tada! Sky and subject are both viewable! Or in this case: the bark and the cracks between the bark on this tree are both viewable! That picture up there is from my second attempt – I had read about HDR and had played around with the HDR mode in photoshop so I knew what I wanted my pictures to look like.

This picture down below was from my first attempt when I just tried it out – no tripod, no reading up on how to do it/the best subjects, etc. I just took a few pictures at various exposure times. Because I didn’t use a tripod, I had to stick all the pictures into a program I generally use for microscopy images from work (ImageJ from NIH) to align all the images (note to self – when doing HDR work – USE A TRIPOD). ImageJ did a pretty good job though. The only things that didn’t get aligned were the clouds (note to self – when doing HDR work – DON’T PHOTOGRAPH MOVING OBJECTS… for obvious reasons! You are taking multiple pictures so when things move, they won’t line up right in the composite image!). So the clouds (and their shadows) look a little funny in this picture but there you have it: my first HDR attempt showing you the most well known sight in Boulder – the Flatirons.

Some people LOOOOOOVE HDR because of its ability to capture bright and dark things and some people hate it because they say that the midtones turn out so gray (my photography teacher said that). I didn’t like my pictures at first because Photoshop’s original HDR composite does turn out looking quite gray but then after playing with the colors a little in Photoshop using the Curves function, I think it turned out pretty neat (i.e. not gray). Thoughts? What should I try to photograph with HDR next?

One thought on “Fun with High Dynamic Range”