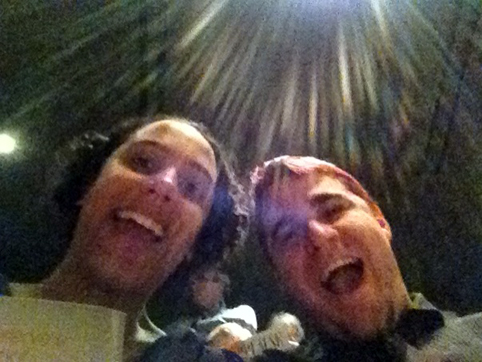 Well on Wednesday night this week, Cobalt and I got to continue our tradition of seeing a musical every year. Last year we saw Next to Normal and two years ago, Cobalt didn’t live here yet so I saw Legally Blonde with my friend C. Legally Blonde is very silly and Next to Normal is very serious so if we continued with this pattern, the musical this year needed to be a funny one. So we went to see Book of Mormon. We were apparently quite lucky to get tickets because it is only here for two weeks and it sold out in a few hours. Luckily for us, back in March I got the e-mail from the Denver Center for Performing Arts saying that the tickets for the Book of Mormon were on sale and Cobalt and I were able to maneuver through the epically slow and overpopulated website and get tickets! Yay!
We started out our evening in Denver by meeting up with our friends J and K for tacos at Pinche Tacos. This restaurant sells ritzy street tacos, which I’ll admit is a bit odd for someone like me who grew up eating actual Mexican street tacos. They were very good though and it was kind of like sushi happy hour where you get a list of all the possible tacos and their various prices (ranging from $2.95 to $4.50 each) and you just check off the ones you want. Cobalt and I each tried four different tacos. Yum. Here’s a picture of our awesome friends pre tacos…

Then we headed to the Denver Center for the Performing Arts for the show. We got there pretty much in time to find our seats before the show but I snapped a few pictures first…. 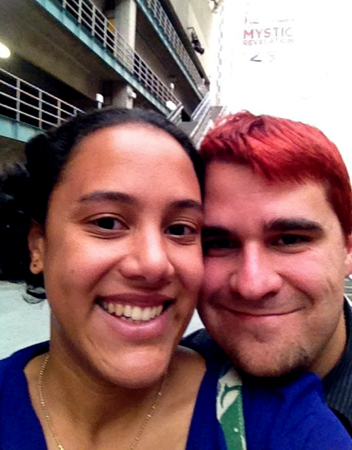 When we bought our tickets, we were in such a rush to actually get tickets that we settled for the ones in the balcony. We had never sat there before but it was kind of neat. You are waaaaaay up in the rafters and your seats are so high off the floor of the balcony that there is a little bar for you to put your feet on – it got a bit uncomfortable in my fancy wedge sandals though… I wish I had worn flats. Anyway, the show! It was funny but also terrible in that South Park kind of way that I am sure many of you are familiar with. Sitting in the balcony, we had a great view of the stage which made it awesome to watch all the dance numbers. The songs were very typical Broadway type songs… except there was more than once where the F bomb was dropped in the middle of some happy musical number… which was kind of startling at first even though we expected it. All in all, I think it made for a very amusing evening and I am glad we got to go. :)

Anyone have a favorite musical? I think my favorite is Wicked… or the Phantom of the Opera (my first musical ever…). Or a recommendation for next year’s “serious” musical? OR Anyone doing something amazing this weekend? :D

3 thoughts on “The Book of Mormon and Tacos!”